Johannus is proud to present its latest living-room organ: the Monarke Amsterdam, which was officially launched during Johannus’ Open House on June 25, 2022.

As Sound Manager Bertus Lap explains, developing the Monarke Amsterdam took many years of extensive research. “What we set out to do from the start with this new instrument was to mimic the experience for organists of playing the famous three-manual Vater-Müller organ in the Oude Kerk in Amsterdam, the Netherlands. I cannot emphasize enough the technical complexity involved in this process: there’s the research into the organ’s architecture, the design and arrangement of the stops, and, of course, the instrument’s sound and reverb.” 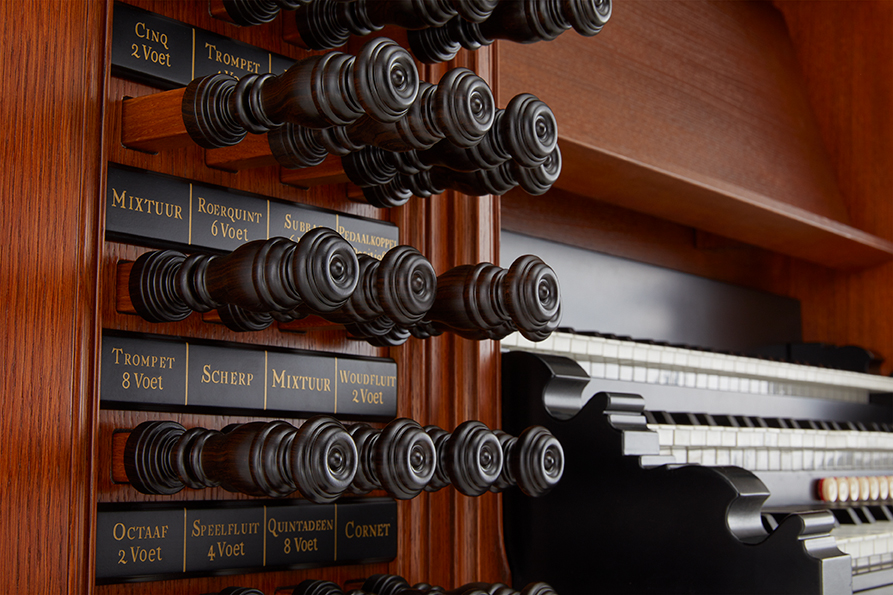 All this research and technological innovation led to the creation of an all-new living-room organ whose presentation has been completely designed along those lines. For one, there’s its appearance: the pedalboard and the bench with their distinctive curlicues, the key cheeks (recognizable by their graceful construction), the decorative frame around the music desk, and the artisanal woodcarving on the front panel – the design has ‘Vater-Müller’ written all over it. Bertus: “One of the remarkable details of this organ is the design of its wooden drawknobs. And thanks to careful study by a typographer, the letters on the nameplates are identical to the engravings found on the original instrument.” 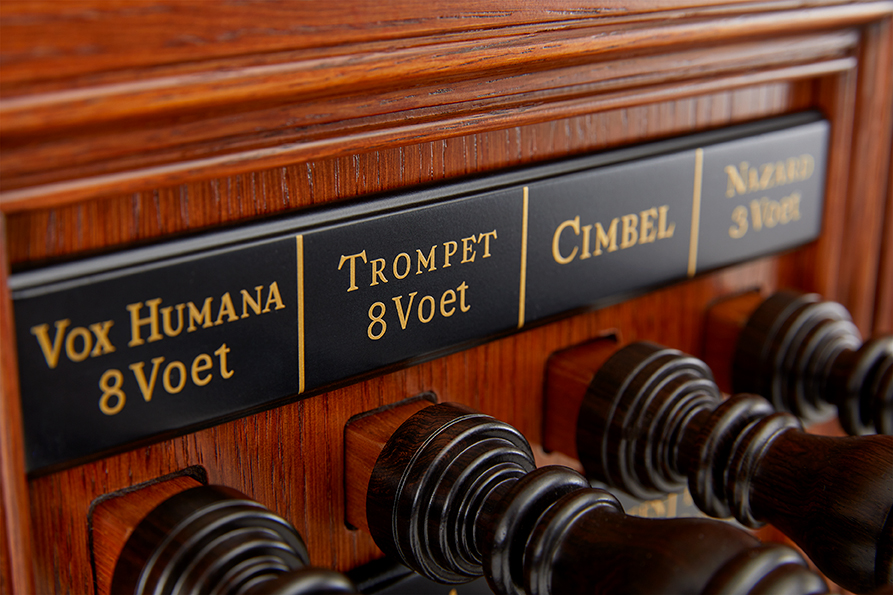 Bertus explains that it made sense for the Oude Kerk organ to be studied in such great detail: “The Oude Kerk in Amsterdam evokes all kinds of feelings in a lot of organists. The church’s current organ is, of course, closely associated with Dutch organist and conductor Feike Asma, but if you venture further back in history, you are likely to come across the name of Dutch composer Jan Pieterszoon Sweelinck (1562-1621). Their names still loom large for many contemporary organists, and some of them actually have personal memories of visiting the Oude Kerk. They may have attended concerts there at some point, or even had the honor of playing the Vater-Müller organ themselves.”

Music lovers across the world rate the Vater-Müller organ so highly not only because of its association with these illustrious historical figures, but also because of the majestic sounds produced by the organ and the extended reverb facilitated by the Oude Kerk. Bertus: “These distinctive qualities have been replicated in the Monarke Amsterdam as faithfully as possible, and I think the result of our work is very satisfying.” Like its model, the Vater-Müller organ, this 54-stop instrument is compatible with any genre, ranging from Baroque to Romantic. Bach and Mendelssohn sound just as clear as a bell on the Monarke Amsterdam as classical choral psalms and contemporary melodies. It’s as versatile as a living-room organ can get, creating a rich tapestry of sound.”

As Bertus explains, all this is powered by some of the most ingenious technology around. Without going into any further detail, he points out the 12.2 audio system, which ensures a superior sound sensation. “We sampled the Oude Kerk organ literally pipe by pipe, as a result of which the Monarke Amsterdam – also thanks to the audio system – sounds virtually identical.” In addition, the freely adjustable reverb gives organists complete freedom to determine the amount of organ and reverb they would like to experience during their performance.”

The Monarke Amsterdam was launched in style during the Johannus Orgelbouw Open Factory Day on Saturday, June 25. Throughout the day, attendees of all ages took part in a host of musical, athletic, and creative activities. Bertus: “The presentation of the new organ was obviously one of the event’s highlights. We were happy to see such a strong turnout on the day, just like in the many years before the pandemic.”